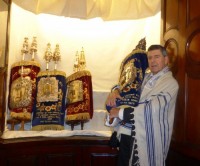 By the early 1990s, the Synagogue had nearly closed down and it struggled to achieve a minyan. Most of the Jewish population had moved out of the East End and membership dwindled. The remaining members, many of whom have parents, grandparents and even great grandparents affiliated to the shul, formed a board of management and set about trying to revive their beloved Synagogue. David Parlons was one of those who came to Sandys Row Synagogue in later life. Following a near-death experience, in 1990, he decided he wanted to put something back into the community. For over twenty years, he has been coming to the lunchtime services daily. “You can feel it,” he says. “It comes alive…” You can listen to David speak in our audio archive.