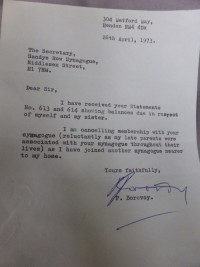 As Jewish people moved out of East London, to North London, Essex and other areas the number of members at Sandys Row declined. In this letter, Sandys Row Synagogue member, P. Borovoy, explains, regretfully, that he and his sister will be joining a synagogue closer to his home in Hendon. According to The Palgrave Dictionary of Angle-Jewish History: “Sandys Row Syngagogue’s survival has been due largely to the efforts of an outstanding post-war president, Louis Brookarsh, who joined its executive in 1946, and to the membership of people living far from the East End who maintain their association with the shul owing to family links and sentiment.” (The Palgrave Dictionary of Anglo-Jewish History, edited by William D. Rubinstein, Michael Jolles, Hilary L. Rubinstein)